Danish Pig Genetics is ready to launch their new 2021 breeding program, which aims to improve the sustainability of pork production. This is done by accelerating the genetic progress on viable piglets, piglet survival and highly efficient pigs through three new breeding goals.

With the new breeding program Danish Pig Genetics is increasing its focus on efficiency and sustainability by balanced breeding through the introduction of three new breeding goals.

The new breeding goal Saved feed is the proportion of feed intake that is not used for production of daily body weight gain and backfat thickness, therefore it optimizes the nutrient utilization by minimizing the amount of feed consumed for the same amount of meat produced.

”With an innovative mindset and approach to pig breeding Danish Pig Genetics is utilizing state-of-the-art research methodologies in areas of feed efficiency and piglet survival. For feed efficiency, Saved feed, that is known as genetic residual feed intake, which reduces the feed that is not used for body weight gain and lean meat production, is going to set the pace for efficient pork production in the world. In addition, genetic progress for piglet robustness and mothering ability will be accelerated by direct selection for pre weaning piglet survival, boar fertility, survivability and viable piglets.” Senior Geneticist, Mahmoud Shirali, explains. 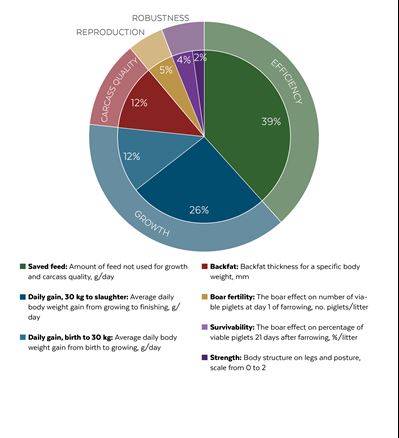